You are here: Home / RV Basics / Avoid These Cold Weather Camping Mistakes We’ve Made
This post may contain affiliate links or mention our own products, please check out our disclosure policy here. 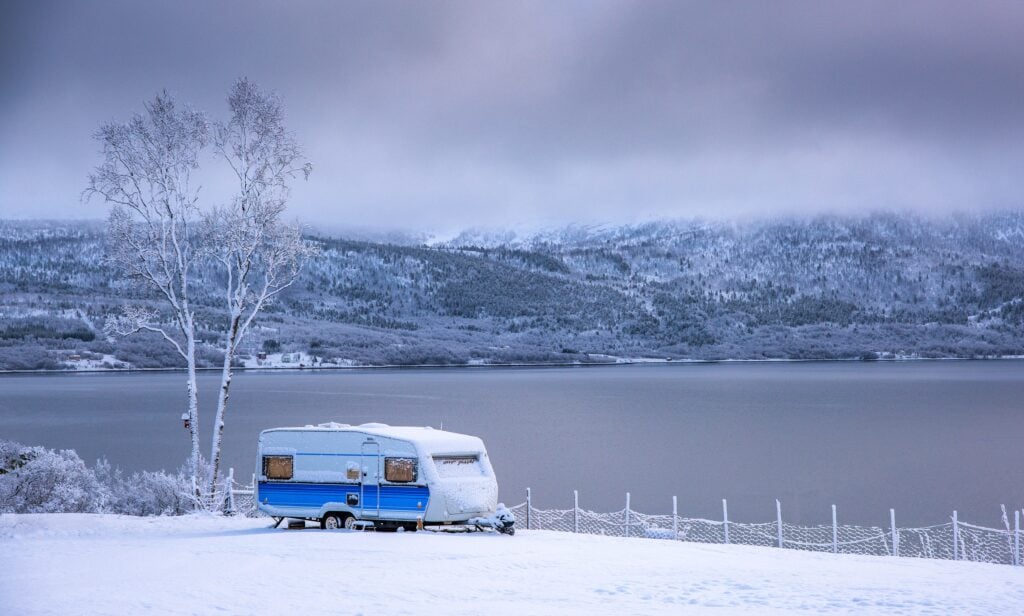 How to Survive Winter RV Camping

For my wife and I, cold weather camping has turned out to be the norm, rather than the exception. Here in Texas, those popular summer months are often too hot for weekend getaways. We normally have business commitments from late February well into August that prohibit longer trips to cooler climates during those months. Subsequently, our traditional long-travel months have been September through January.

Our cold weather camping is actually glamping. Full disclosure, our camper is a 43-foot diesel motorhome with heated floors and a fireplace. The winter camping mistakes we made are not the travails of staying warm, rather they are mostly equipment related, some with costly and dangerous ramifications.

With grown children living in Colorado, we have made several cold weather camping trips to visit them. We’ve also made a few mistakes along the way. In this article we’ll talk about:

Some of the cold weather camping mistakes we have made have been fairly minor. For example, being an ex-northerner I knew rock salt would do a great job of keeping my motorized steps free of ice and snow.

I also knew, but seemingly ignored, that if not rinsed off properly and frequently, said rock salt would also keep my steps free of paint, and replace that paint with an abundance of rust. Fortunately I was able to stem the reaction of iron and oxygen after our trip by cleaning, repainting, and lubricating those RV entry steps.

Still somewhat minor, however, with a less than happy ending, was my failure to clean and lubricate all of my tow bar system components after a rather salty ride over I-70 through Colorado. I finally decided to give everything a once over about a month after we got home and was confronted with several items that needed elbow grease, a little steel wool, paint, and lubrication as surface rust and corrosion had played havoc with most of my towing equipment.

Fortunately the powder-coated pieces fared pretty well. Lesson learned, however, always wash the road salt off of your vehicles and equipment after traveling on salted roads.

While not addressing those salt issues is pretty stupid in its own right, I’ve done worse. Fortunately, none of these incidents resulted in tragedy, but I point out my own ignorance, in the hopes of helping others.

Driving I-70 in December

In the aforementioned ride on I-70 through Colorado, I should note that this was a full drive from Grand Junction to Denver, about four hours. While it’s safe to say we “watched the weather”, we didn’t really have a backup plan.

It was a classic case of we have to be somewhere and have a deadline. Our cold weather camping plans didn’t account or allow for an alternate route or additional time. We basically jumped on I-70 and hoped for the best.

After all, the roads looked great in Grand Junction! As we would our way up and into the Rockies, however, the snow line seemed to edge closer and closer to the highway. Soon we were reaching higher elevations and passing ski resorts, show plows, and chain-up areas.

As each mile progressed, and after each chain-up warning sign (and subsequent fine if you got stuck and blocked the highway) I got a little more nervous. I began to imagine the cost of a huge wrecker having to trudge up the mountain and somehow pull my 43-feet of stupidity out in a blizzard.

Fortunately, none of that happened and once we went through the worst of it the drive was fine. Nevertheless, it was a stupid cold weather camping mistake. Next time there will be more planning and a backup plan.

The Million Dollar Highway is billed as one of our nation’s most spectacular, yet dangerous drives. In fact, dangerousroads.org states,

“Forget standard driving safety measures like guardrails and shoulders, there aren’t any on this stretch, so swerving off the road is not advised!”

They say ignorance is bliss, and in this I was apparently very blissful. In another one of our December journeys up to Grand Junction, I wanted to try a different route. We had made the run up Hwy 191 through Moab countless times and were ready for something different. Hwy 550 looked like a good route, and in truth it was. Yes, in our big diesel pusher it took every bit of my concentration.

We were however blessed with good weather. Despite there being plenty of snow on the side of the road and tiny patches of ice here and there, it was a beautiful journey. It was not relaxing however, and the uncertainties of how long does this go on and when is it going to get dark made for trepidus travel.

It’s not that I’m a bad planner, I’m not. I plan our trips in detail using the best tools available. However, on a whim, I opted for a different route having done no real research on where I was going. This is where ignorance turned into stupid cold weather camping. When you are driving an 8-wheeled monster the size of a city bus in the winter, you should never wing it.

I hesitate to call this experience stupid, or a mistake. We got some snow, more or less expected, while winter camping. It was quite enjoyable in fact and made for a humorous run up to the Grand Canyon in the Jeep. We knew we probably weren’t going to be able to see anything, but we were camped close by and it was fun seeing the snow.

When we returned to our campsite at Railside RV Ranch in Williams, we had a couple of inches of snow on the RV. My plan as it were, was to climb up on the roof and sweep off the snow. All in all, this was pretty effective for the inch or two dusting of snow we received. Where it became problematic was after several inches of snow, the bottom layer turning to ice as it reacted to the warm RV.

When it came time to pack up the RV and leave, I spent a lot of effort 13-feet in the air with a broom trying to dissuade the ice from remaining on my RV, lest it slide off into the car behind me on the freeway. I was careful, but didn’t feel particularly safe, and vow to plan better the next time.

It turns out cold weather camping mistakes can be dangerous, expensive, and stupid all at once. As our time came to depart loved ones on this particular winter holiday, we opted to head down the familiar Hwy 191 again through Moab and on into Cortez, Colorado where we had an overnight sight booked.

The weather was looking to get bad later in the day, and we had planned to head out early. We were forced to delay our departure due to some family issues and were watching the weather closely. Finally we had to make some decisions, and my wife opted to stay behind a bit longer to help with some family things and follow in the Jeep later.  I headed out in the motorhome hoping to beat both the snowstorm and the sunset. I did neither.

Instead, I ended up with one of the most treacherous and frightening drives of my life. At one point, I was hoping to just pull over, but things were so bad and snow had drifted so much I couldn’t tell the difference between a shoulder, a turnout, or a ditch full of snow. The only solace I had were trucks and headlights fore and aft. I felt safer on the road than I did anywhere else so I kept going.

Eventually I made it to the campground in Cortez, feeling quite fortunate. I vowed to set up camp and get the heated floors and fireplace cranked up and wait for the Mrs. to arrive. After leveling, I pushed the button for my hydraulic slide to push out the passenger slide.

Unbeknownst to me, the snowstorm I had just driven through had encased my entire awning topper mechanism in ice and show. In a testament to the high quality and power of the hydraulic slide-outs in my coach, with a deafening crash that passenger slide opened right up.

Already frazzled from the harried drive in, I bounded outside in the snow and looked all around my coach to try and figure out what happened and what the sound was. In the dark and in the snow, I couldn’t really see anything wrong. My first thought was a timeless quote from C3PO,

‘That’s funny, the damage doesn’t look as bad from out here.”

In the light of the following morning, however, I could see that the powerful slide had ripped the awning slide topper out of its cradle, snapped the spring axle, and bent the primary roller shaft. Ka-Ching! Not only was this a stupid mistake from driving when I had no business driving, but it was an expensive one as well.

The drive was equally as treacherous for the wife, trailing in the Jeep a few hours behind. She had faced the same conditions, albeit with 4WD, and almost all of it at night. We didn’t plan ahead for her to have an extra phone charger or anything in the Jeep that I drive everyday. Somewhere between Moab and ‘where am I’ her phone died. Only by grace did she manage to pull into the campsite a couple of hours after I did.

Those years of bad planning are behind us. We learned some valuable lessons. In fact, I can pull my service invoices and tell you exactly how valuable they were. Still, camping in winter months is very doable and enjoyable with just a little planning. Here are a few reminders on how you can improve your cold weather camping experience.

Enjoy your winter camping, spring is just around the corner. In the meantime, make sure you have these 10 Winter Camping Items You Shouldn’t Travel Without.