You are here: Home / Blog / Is Class A for Generation Y?
This post may contain affiliate links or mention our own products, please check out our disclosure policy here. 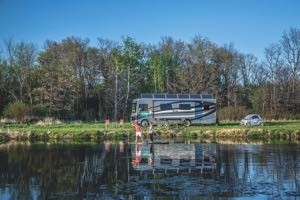 If you had wealthy parents, your first car may have been brand-new, but most of us started with an old used car that was basic transportation, and worked our way up to new models as our circumstances improved. And so it has been in the RV industry—a family starts camping in a tent, and then moves from a truck camper to a small trailer and ultimately a big motorhome. By the time a couple is ready for a Class A motorhome, however, they are no longer young. That’s the way it has always seemed, but maybe times are changing.

Jason and Nikki Wynn, both in their early 30s, are trying to persuade builders of Class A motor coaches to pay more attention to younger buyers. The Wynns, who run a popular website at gonewiththewynns.com, believe there is a growing motorhome market among young adults whose jobs are not tied to a location. Smartphones and the Internet have made it possible for many people to work from home, and often that home can just as easily be a motorhome as a fixed address. Exquisite 45-foot coaches may be for the rich, older crowd, but smaller Class A motorhomes are affordable for a broader population that includes many young adults.

The Wynns are among those who have no permanent address but travel full time in a Class A motorhome. Jason Wynn was working as a photographer and Nikki as a makeup artist when, at the age of 28, they decided to search the country for the perfect place to live. They liked traveling so much that once they started, they couldn’t stop. At first, said Nikki, “We didn’t even know we were nomads.” But, she added, “It turned into a great way to live.”

To keep in touch with family and friends, they went online to post entertaining stories, intriguing photos, and videos that showed off their exuberant personalities. Soon strangers began logging onto their website. Facebook, Twitter and Instagram pumped up interest, and the Wynns built a following.

Their first full-time RV in 2010 was a Monaco Vesta, and as one of the first buyers of that model, they provided valuable feedback to the manufacturer. That caught the attention of Fleetwood RV—like Monaco, a unit of Allied Recreation Group—and Fleetwood offered the Wynns an attractive lease on a 2014 Excursion diesel motorhome to get their input. That experience led to working with Fleetwood to customize a 2016 Bounder gas motorhome to meet their needs and test innovations. 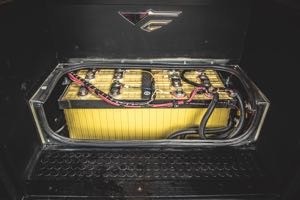 The Wynns took delivery of the 34-foot Bounder on a one-year lease in April, and they have put it to good use, spending the summer motoring around Alaska. Their Bounder is customized with a massive solar power system with six panels that provide a total of 960 watts of power, a lithium battery pack instead of the standard lead-acid batteries, a hybrid 3,000-watt pure sine wave inverter, a composting toilet, and boosters to improve Wi-Fi range and cellphone communication. The Wynns customized the interior with light paneling, eco-friendly fabrics and convenient workstations.

With the modifications, the Wynns can spend extended time in isolated locations. “Wild camping,” they call it, and they would rather find quiet places to enjoy nature’s beauty than pull into an RV park and hook up to utilities.

You can learn all about their motorhome’s custom features at the gonewiththewynns.com section they have labeled “Resurrecting Dinosaurs.”

As you may gather, the Wynns think that builders of motorhomes are behind the times—both in style and technology.

Nikki is not a fan of the big swirls that dominate the exteriors of so many Class A motorhomes. “It seems everyone looks the same—they all do the same stuff.” She’d like to see a cleaner, less cluttered look. Inside the coach, too, she thinks that—although tastes vary—many younger buyers would prefer a sleeker design. “Everything is so horribly traditional,” she said.

Nikki stressed that neither she nor Jason are qualified to design a motorhome. They merely have ideas based on their own experiences and what they have learned from other RVers. And in customizing their Bounder they made a few mistakes. For example, Nikki said, the woven fabric she carefully chose for the dining room chairs has turned out to be impractical.

On the other hand, the solar power system and the lithium batteries have more than met expectations. “We’re over the moon about it,” Nikki said.

The composting toilet is the feature that might have the most trouble finding a mass market. Yet it is extremely practical, Nikki said, because it uses no water, does away with the need for a black water tank, and, contrary to some expectations, has no odor.

The customized features on the Wynns’ Bounder would cost more than $32,000 at retail if installed at the factory, according to Steven Hileman, director of product marketing at Fleetwood. (The Wynns say you could do it more cheaply by buying the equipment yourself and saving on installation.)

As product testers, the Wynns are valuable to Fleetwood because they provide a fresh, youthful perspective, have a following among other RVers, and, as Hileman puts it, they “use and abuse” their RV.  Hileman said the Wynns drive to places most RVers would never go, and are in their motorhome all the time. So all the features on their motorhome get a rigorous test.

Their experience with the Wynns has helped to persuade Fleetwood to begin prewiring motorhomes for solar power. Hileman said Fleetwood had underestimated the desire for solar power by consumers, but while some buyers want a lot of solar power, others want only a little or none. The best solution is to prewire coaches so customers can install what they need.

Hileman said Fleetwood is learning how lithium batteries perform from their use by the Wynns. For example, he said, it is becoming clear that with lithium batteries, an RV doesn’t need as big a generator. That sort of information could be deduced speculatively, Hileman said, but it’s good to have it confirmed with real-life experience.

Don’t expect lithium batteries to become standard in an RV anytime soon. The battery pack for the Bounder if factory installed to work seamlessly with other components would carry an MSRP of $10,346 at a dealership, according to Fleetwood. There may be ways to install the system more cheaply, but still it’s a major investment. The lithium battery pack alone would cost $4,480 if bought direct from the manufacturer.

Neither Fleetwood nor other major RV manufacturers are offering lithium batteries now, but Hileman said they might become an option on high-end coaches in the future, and because they are lighter than lead-acid batteries, might even have a place in smaller RVs where weight issues are critical. 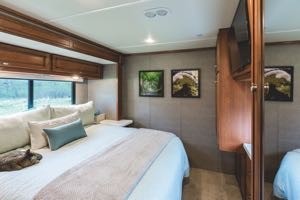 While the Wynns think motorhome builders should pay more attention to younger buyers, Hileman said the reality is that most motorhome buyers are baby boomers, now in their 50s and 60s. Still, Hileman said, it is useful to know what younger people want. The interior décor that the Wynns chose was completely different from the standard décor.  While that new look may not be adopted now, it’s helpful for Fleetwood to know where trends could be headed.

Nikki Wynn says she is convinced that more and more young people are traveling on the road full-time, and while that may be true, Hileman said the overwhelming majority of buyers use motorhomes as they were intended—as vehicles for recreation, not permanent homes on wheels. Motorhomes aren’t designed for full-time use, he said, and if they were, it would drive up the cost substantially. Of course, some people do use their RVs full time, and the challenge for builders, Hileman said, is to make their products durable but affordable.

When I talked with Nikki Wynn last month, she and Jason were in Anchorage, Alaska, and planning to come down the West Coast, looking to buy a sailboat. Their plan is to alternate between travel on land and sea. What they don’t envision is finding a place to settle down.

As the Wynns explain on their website, “A sedentary life just isn’t in the cards for us. We thought a good ol’ American Road Trip would help us find our place in the world, a place to settle down. In turn it caused an irrefutable desire to search, explore, discover, grow and learn. None of which we can do in any one place for too long.”