You are here: Home / Departments / Finally, Unrestricted Internet Access For RVers
This post may contain affiliate links or mention our own products, please check out our disclosure policy here. 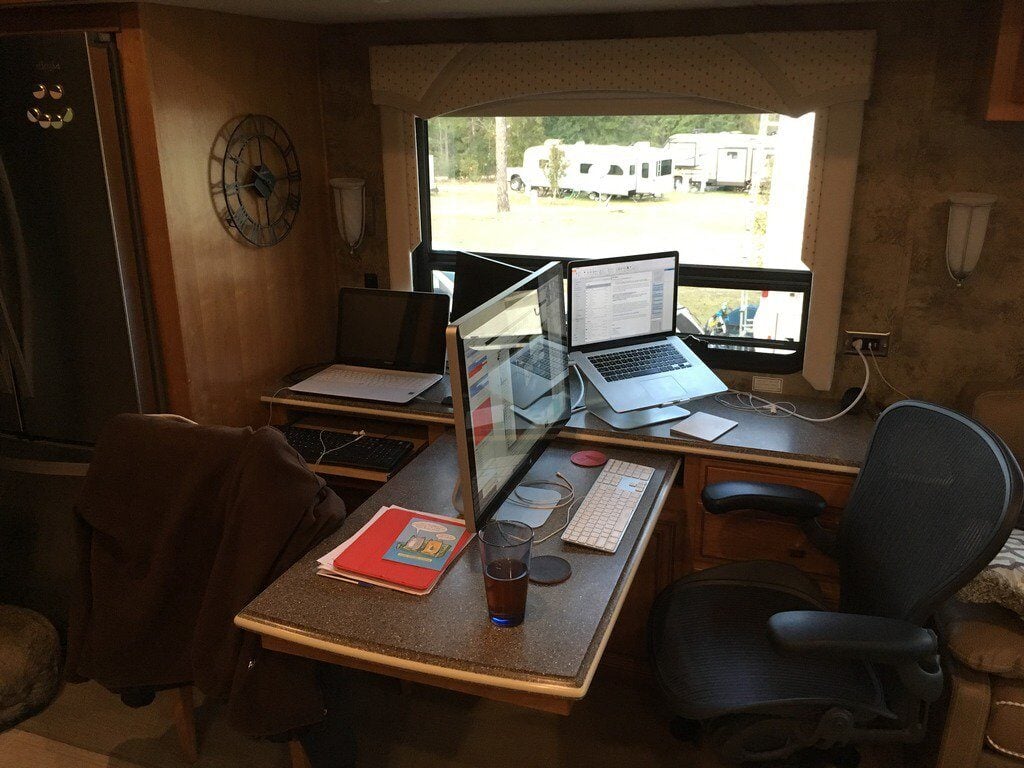 Living and working on the road has tons of benefits. Unrestricted internet access for RVers usually isn’t one of them. Getting online to work and play on the web has always been challenging and expensive for RVers like myself, until now. A new cellular broadband plan with unlimited, unthrottled data for $99 a month is making getting online easier for full-time and part-time RVers, even when camping in remote locations.

Getting online is easier, but not perfect

Internet access has become a necessity for many RVers.  That’s why so many RVers flock to popular sites like CampgroundReviews.com where they can see which cellular carriers are available at any given campground.

When my husband and I hit the road in 2007, cellular broadband coverage was poor outside of major cities. Knowing that we wanted to work and go RVing, we purchased a roof-top mounted, automatically deploying mobile satellite Internet system to get us online. The hardware and data plans weren’t cheap, but it was the only way we could reliably connect to the web and work from the remote, off-grid locations we love.

Since then, cellular broadband coverage has improved in rural areas and we rely on our dish less than before. But as working wanderers know, Internet connectivity for nomads still has issues. For example, if you camp in a rural location near crowds or on busy holiday weekends, local cellular towers quickly become overloaded and connections are painfully slow. When you do get online, your so-called “unlimited” data usage is automatically throttled down once you’ve exceeded your plan’s monthly limit.

Many full-time RVers use multiple cellular broadband providers for redundant Internet connectivity. It’s expensive, and a hassle to roll over from plan to plan. This is why my husband and I still rely on our second satellite Internet system, the RV Datasat 840, as a backup method.

Since we often camp outside of broadband coverage to get away from crowds, our system comes in handy. The dish has even been deployed in big cities with cellular coverage gaps. We’ve also used it during natural disasters when power lines were cut-off because of flooding or wildfires.

Are you old enough to remember old television sets with rabbit ear antennas? Or the “UHF” knob that tuned in regional oddball TV stations? Those channels were made obsolete a decade ago. That’s when digital broadcasting took over television airwaves.

In 2017, the FCC auctioned off the funky UHF broadcast spectrum. It was known as “Band 71,” a wavelength used by low-budget TV stations numbered 38-51. When the FCC announced the auction, major cellular providers like Verizon and AT&T turned their noses up at purchasing it. The low-frequency spectrum appeared to be worthless because it broadcasts at a lower radio frequency than most other bands used for mobile phones.

But T-Mobile didn’t laugh at Band 71. They knew it had value because lower frequencies can travel farther. It can penetrate trees, buildings and terrain better than higher frequencies. Engineers knew Band 71 could enable T-Mobile’s signal to reach more remote, rural places than ever before. The “UHF” of cellular broadband companies gobbled it up and within a year, T-Mobile’s coverage exploded thanks to that old broadcast band. Today, the company’s coverage has caught up to major cellular broadband providers and is close to exceeding them.

When T-Mobile service is coupled with the Pepwave MAX Transit Mini Router and the Mobilsat service plan, Internet connectivity for nomads takes another leap forward. Mobilsat is the only company offering an unlimited, unthrottled 4G LTE data plan, making it a full-time RVer’s dream.

To decipher how this cellular broadband service works, I spoke with Jon Grote, Partner Development Manager at Frontier Computer Corp. Frontier is an IT solutions provider and Peplink distributor. Grote is a weekend RVer and lives in a remote area of Northern Michigan. The new 600 MHz service has transformed how he, his wife, and two kids connect to the Internet. They use it whether they’re at home or on the road.

Until the new Mobilsat plan came along, the Grotes endured painfully slow and expensive broadband coverage. All it took was getting on-board with Mobilsat and one external rooftop antenna that enabled him to connect a T-Mobile tower three miles away. “Now we can stream 3 TVs at a time, with an X-box going too!” he says.

Grote explained that what makes Band 71 so effective in remote areas, and for Internet access for RVers, is that the 600 MHz frequency is literally broadcast lower to the ground than other bands.

“It’s a wide band that goes up and over trees in a circular arch fashion,” he explained. “It’s still a classic cellular signal being broadcast from the tower, but with it being lower it does penetrate through buildings and terrain a little bit better than normal cellular frequencies.” Since RVs are also closer to ground level than a sticks-and-bricks home, they’re an ideal recipient of Band 71 connectivity.

Mobilsat isn’t the only provider connecting users with Band 71. But, they’re the only company Grote is aware of that is currently offering unrestricted data usage. He says the service and coverage is hard to beat. “It’s becoming the winner as far as the size of network in the U.S. Band 71 is hard to beat, especially for an RV,” says Grote. “It just makes a lot more sense for traveling Internet requirements.”

When coupled with the Pepwave MAX Transit Mini router, Mobilsat’s plan offers ideal Internet connectivity for nomads. Since the router features multiple SIM card slots, users can purchase a card for every provider if they desire.

As a user RVs around while being connected to the Internet, the router automatically switches over to a local tower when a T-Mobile signal disappears. And if a user purchases a Bell & Rogers SIM card for the device, RVing to Canada becomes seamless and without roaming charges or data restrictions. This was a common frustration I encountered when RVing through the North Country.

It’s a blast to see that more people than ever before have become full-time RVers like my husband and me. Unfortunately, Internet access for RVers has been relatively stagnant. Things are changing though. After fourteen years on the road, it’s great to see that ubiquitous Internet coverage is available. And, it’s affordable for anyone who wants to enjoy this lifestyle while working to pay for it. Learn about 4G LTE unlimited data at RVdatsat.com.