You are here: Home / Columns / RV Golfer / Camp In The Mountain State Any Time Of Year
This post may contain affiliate links or mention our own products, please check out our disclosure policy here.

by Rick Stedman
October 7, 2019Filed under:
Table of Contents show
Attractions near Huntington

Beech Fork Lake was a result of the U.S. Army Corps of Engineer’s damming of Twelvepole Creek in the 1970s. Beech Fork State Park has been open to the public since 1979 and is a popular destination for locals and visitors alike. 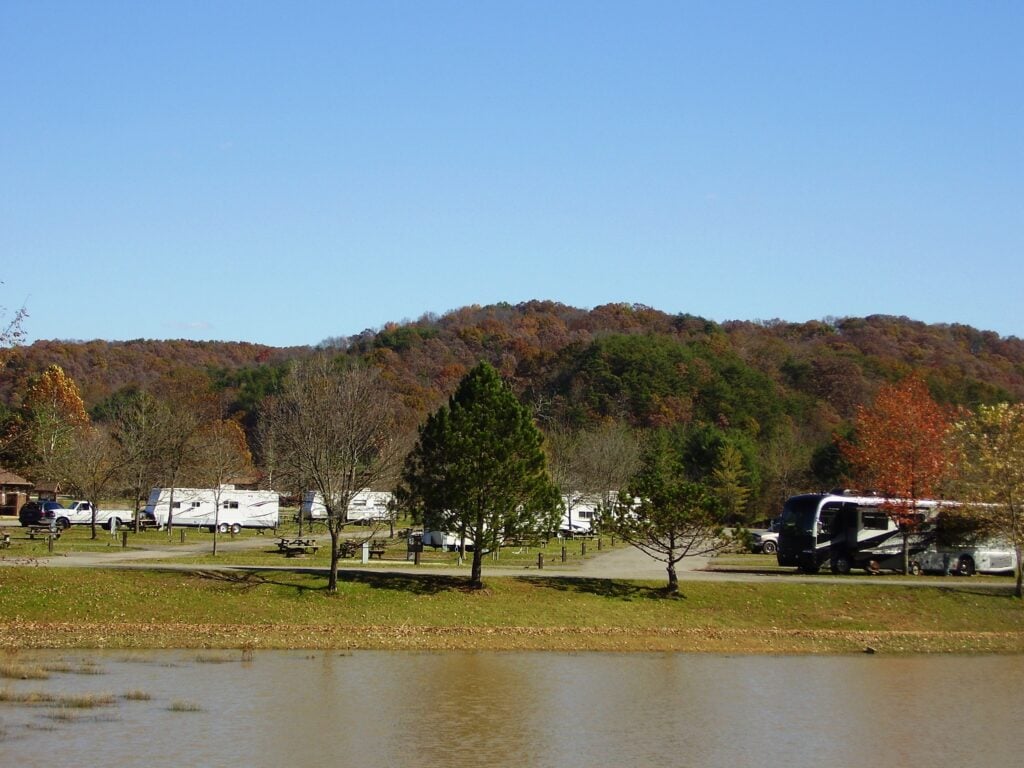 Set in the sprawling hills of southwestern West Virginia, Beech Fork State Park offers 275 sites throughout its 3,144-acres. Open year-round, the pet-friendly campground offers paved parking pads, grills, and picnic tables at all campsites. Pull-through sites and big rig access is also available along with a variety of other amenities.

The two-mile Overlook Trail is popular with visitors. Featuring a steep incline at the trailhead, Overlook Trail eventually reveals a picturesque overlook of the park headquarters and recreation area. Despite its name, the Physical Fitness Trail is an easy one-mile walking trail, great for an early morning or after-dinner stroll.

One of the most authentic recreations of the past can be found at Heritage Farm Museum and Village in Huntington. The frontier village called Heritage Farm began with a Spring Festival in May 1996. The Farm has since added a petting zoo, a working sawmill, and the Artisan Center, which houses the Heritage Farm Artisan Guild.

The Blenko Glass Company has been around for more than a century. Visitors can watch the art of glassmaking by visiting the company’s observation area Monday through Friday.

The Museum of Radio and Technology offers an insightful look at this slice of Americana. Within its more than 10,000 square feet of display area, the story of entertainment technology from the 1920s through present-day unfolds. Visitors can learn about the history of radio and how it all began. There’s also the story of how television, computers, and military operations fit into the evolution of the industry.

Many will be taken back in time when viewing the 1950s-era radio and TV showroom. There’s also a pre-WWII radio shop, broadcasting studios, a “ham” radio station, various vintage radio sets, and a comprehensive technical library that is open to the public.

One aspect of the museum that most appreciate is the knowledgeable tour guides. Most of them have some connection to the industry or are veterans of broadcasting. They gladly take time to explain and demonstrate various aspects of the museum.

In addition, there’s also a unique gift shop and West Virginia’s Broadcasting Hall of Fame. Admission is free, but donations are gratefully accepted. Since operating hours are limited, it’s best to call ahead for the current schedule.

RVers can also stroll on the fairways of several area golf courses. Esquire Golf Course in Barboursville was established in 1974 and features a well-manicured 18-hole layout. The par 72 course stretches to 6,887 yards from the tips and is a good test for golfers of all abilities. There are five sets of tees to choose from, and the layout is quite forgiving, especially the front nine.

Located a few miles south of Huntington is Sugarwood Golf Club, which opened in 1965 as a nine-hole course. It was later expanded to 18 holes and has undergone several upgrades and renovations over the years. Today, Sugarwood Golf Club is one of the state’s best public courses.

With water coming into play on half the holes, the par 71 course measures 6,710 yards from the farthest tees. In addition to the golf course, golf shop, and golf lessons, the team at Sugarwood Golf Club also offers its state-of-the-art Foresight Launch Monitor, which helps provide detailed insight into your golf swing.

There are many more interesting things to see and do in the greater Huntington area. Details can be found at Visit Huntington. You can also learn more about the local campgrounds and RV parks on RV LIFE Campgrounds.

Rick Stedman is an avid golfer, RVer, and writer who lives in Olympia, Washington. Rick writes a weekly golf blog, The 19th Hole, for RV LIFE. You can reach him at rstedman@gmail.com.