You are here: Home / Great RVing Destinations / Camping In Oregon: A Wonderland Of Mountains, Forest, And Coastline
This post may contain affiliate links or mention our own products, please check out our disclosure policy here. 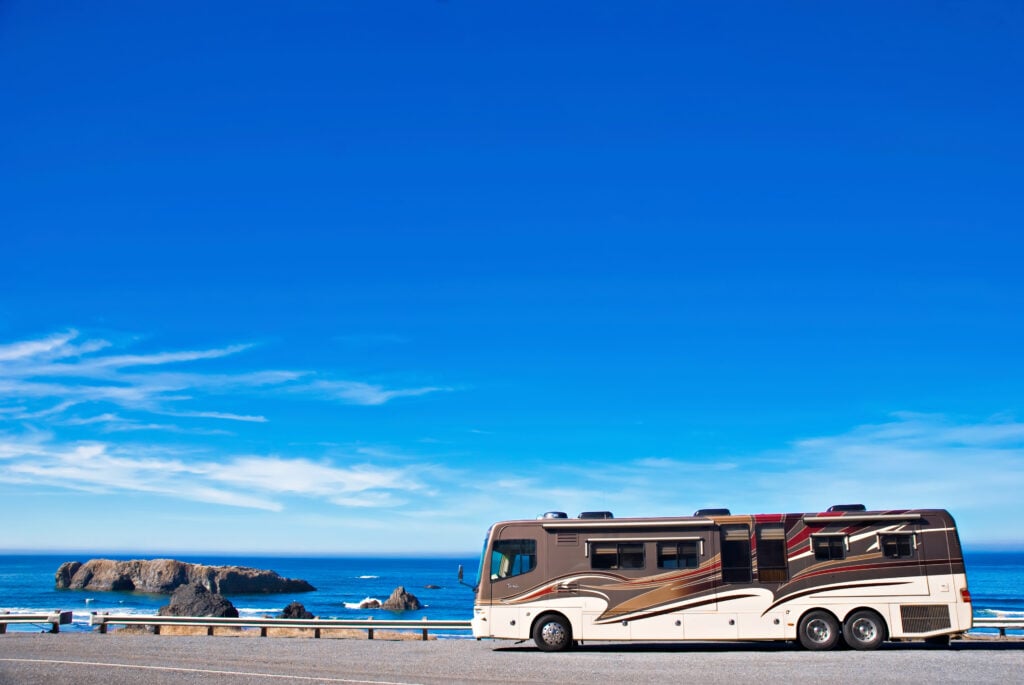 If you’re an RVer, you owe it to yourself to plan an extended RV trip to Oregon. The destination is well worth the long drive west. There is much to see from the beautiful coastline to the mountains, forest, and high desert east of the Cascades.

All You Need to Know About Camping in Oregon

Oregon offers plenty of activities to enjoy year-round. The best time to visit is during the spring and summer, when the weather is warmer and all of the seasonal parks and campgrounds are open. However, there is a variety of winter activities to experience as well including skiing, snowboarding, and snowshoeing in the mountains.

It is often raining on the Oregon Coast, especially during the winter months. But if you plan your trip right, you may even be able to spot gray whales off the coast during their annual migration.

There are several major highways that extend across the state of Oregon. Highway 101 runs along the entire length of the Oregon Coast and can accommodate larger RVs, though it can become narrow in some areas.

Interstate 5 connects all of the major cities in Western Oregon including Portland, Salem, and Eugene (and continues north towards Seattle).  A few highways including I-84 and U.S. 20 run east-west across the state over mountain passes. RVers looking for current road conditions can find up-to-date information on TripCheck.com and get RV-safe directions with the RV LIFE App.

Camping on the Oregon Coast

Oregon has a spectacular Pacific coastline that forms the western border of the state.  It was declared a national treasure in the 1960s and preserved for all US citizens and visitors to enjoy.   The beaches cannot be privatized, and all beaches are open to everyone.

Your dogs are welcome on Oregon beaches, and I have been on dozens and dozens of them with miles of unobstructed open sand with few or no other people within sight. Please be aware that the ocean along the Oregon Coast is great for surfing but can be unpredictable with sneaker waves and rolling logs, so remember what my father taught us as children: never turn your back on the ocean. 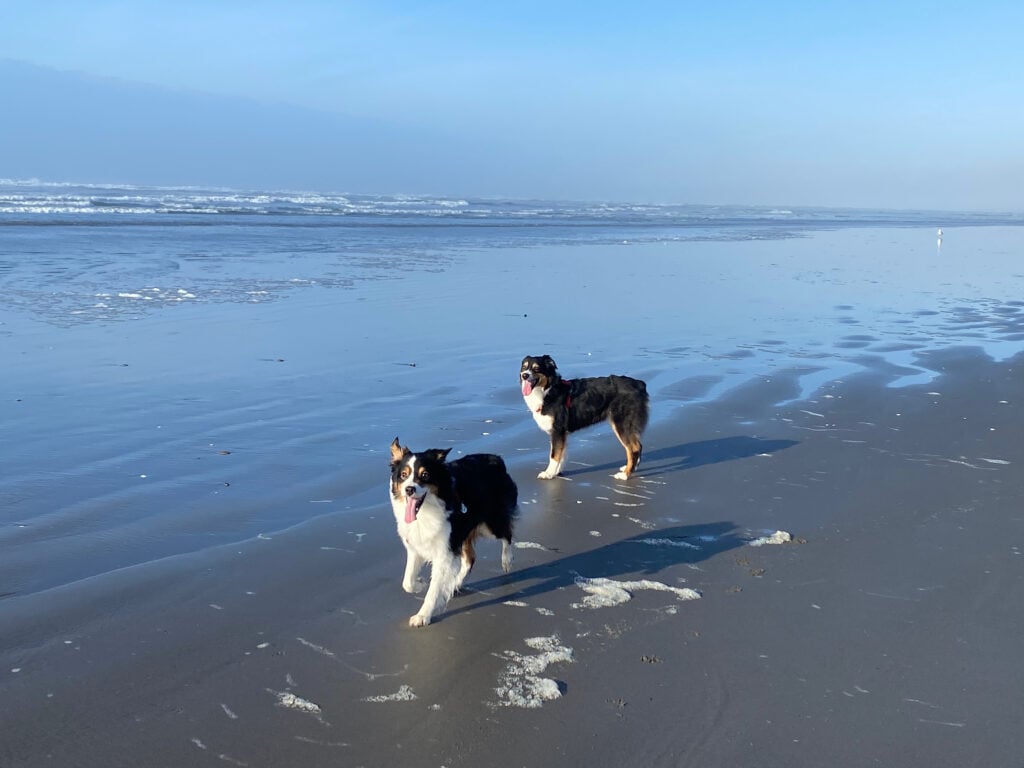 Camping in Oregon by the beach. Photo by P Dent

Keep a close eye on the waves, your kids, and your dogs, while you enjoy the spectacle of the pounding surf.  If you’re patient, you may also see the spouting of a whale as they migrate between Baja, Mexico and the Bering Sea. There are several state parks along the coast with RV-friendly campgrounds as well as small towns with RV parks, resorts, and other coastal accommodations.

While you’re on the coast, don’t miss the opportunity to taste some of the fresh seafood straight from the sea. The state offers abundant seafood choices from fresh Dungeness Crab to oysters, tuna, salmon, halibut, shrimp, and scallops.

RV camping in the Cascade Mountains

The backbone of the state is a mountain range that runs from the Columbia River on the northern side of the state all the way down into California. Mt. Hood is the highest peak in the state and is only about an hour’s drive outside of Portland.

The US Ski team is able to practice skiing all summer on the Palmer Snowfield located on the southern flank of Mt. Hood at an elevation of over 9300 ft. Recreational skiing often begins on Mt. Hood around Thanksgiving and continues until Easter or beyond. 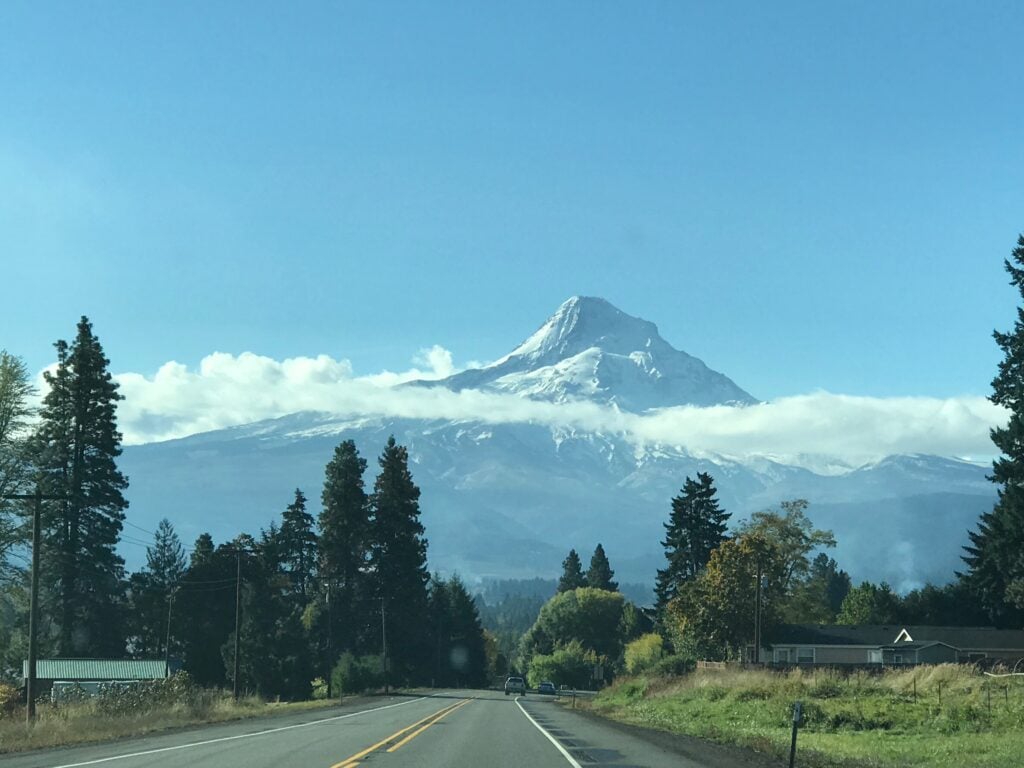 An active volcano just 90 minutes east of Portland. Mt Hood is a delight for snow boarders, climbers, and skiers. Photo by P Dent

Further south in the Cascade Range is the sunken peak of Mt. Mazama in Crater Lake National Park. The sunken peak forms the deepest freshwater lake in the US with a depth of 1,943 ft. (592 meters).  The lake can be viewed from Rim Drive, which often is still covered in several feet of snow late into June, and with a difficult decent on foot you can hike to the lake shore. (If you are not in shape, I advise against this hike.)

Crater Lake is famous for both its depth, but also its color, which is one of the deepest blue bodies of water anywhere in the US.  It’s stunning to see from the rim and even up close the color does not change. 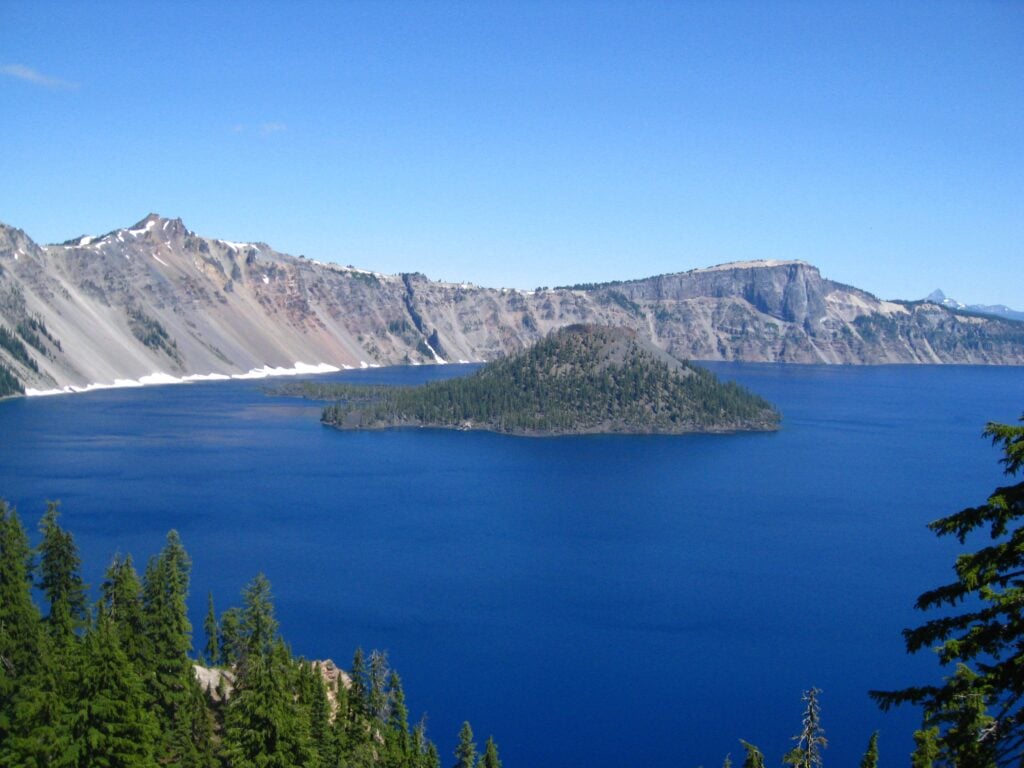 Although there is frequently deep snow still covering Rim Drive at Crater Lake National Park late into June, you can still enjoy any one of several rustic campgrounds near this National Park all through the summer.  Keep your eyes on the treetops when driving to and from Crater Lake and you may discover natural stands of Sugar Pine trees with their foot-long cones.

Also, be advised if you’re driving a big rig, don’t take it on Rim Drive. The drive is very curvy and narrow with no shoulders, and few pull-outs.  If you’re heading to the Crater Lake Campground and approaching the park from the north, do not enter the park in the North Entrance.

Take your big rig around to the Southern entrance to reach the campground.  I did the Rim Drive in a 33-foot motorhome many years ago before we had safe RV GPS and I didn’t know better.  I would never do that drive again in a big RV or a large fifth wheel.

The Blue Mountains and the Steens 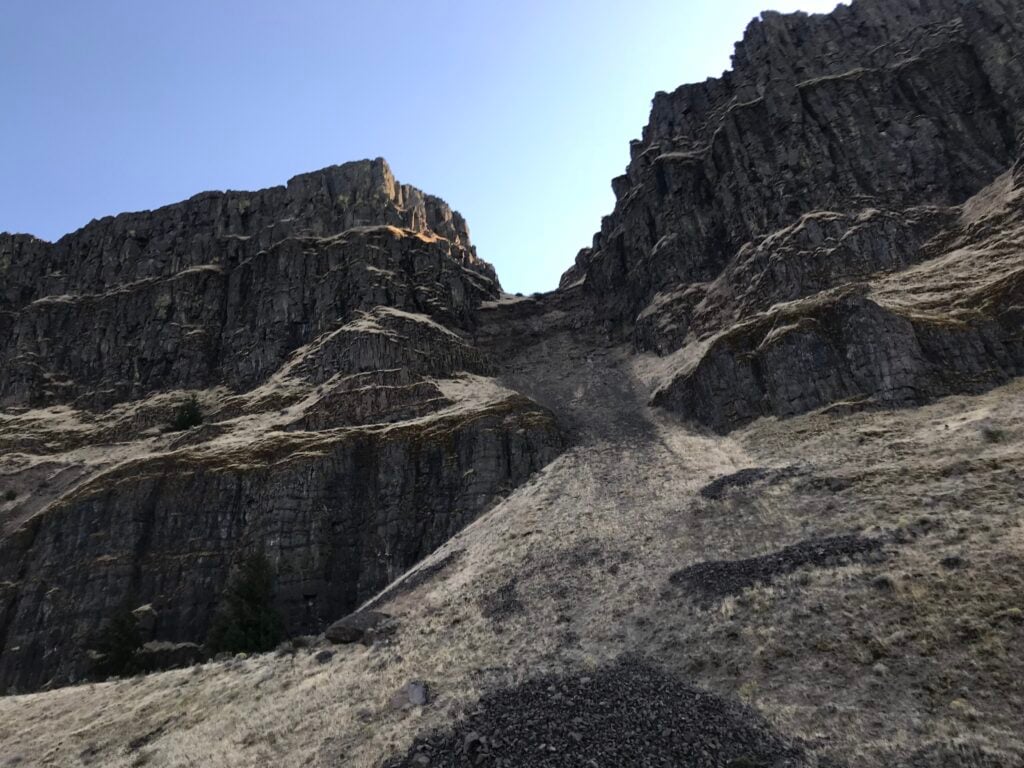 A rocky bluff along the Columbia River near Heppner, “Gateway to the Blue Mountains” Photo by P Dent

The Blues is where one of the last tests of fortitude, courage, and endurance for the weary travelers on the Oregon Trail.  The history of the trail is preserved in the Oregon Trail Museum in Baker City, Oregon and the original ruts of the trail can still be seen in many places across the prairie land.

You can also see antelope, elk, coyotes, cougars, bears, deer, rattlesnakes, and numerous species of fowl in the high desert and prairies of Oregon.

The major urban areas, Portland, Eugene, and Salem, offer a wide array of entertainment and activities such as zoos, museums, performing arts, live music festivals, parades, rodeos, and more. The state is famous for its craft brew and wine industry and members of Harvest Hosts will find welcoming accommodations in Oregon. There are over 100 RV parks in the Portland area, and plenty of state parks within a day’s drive. 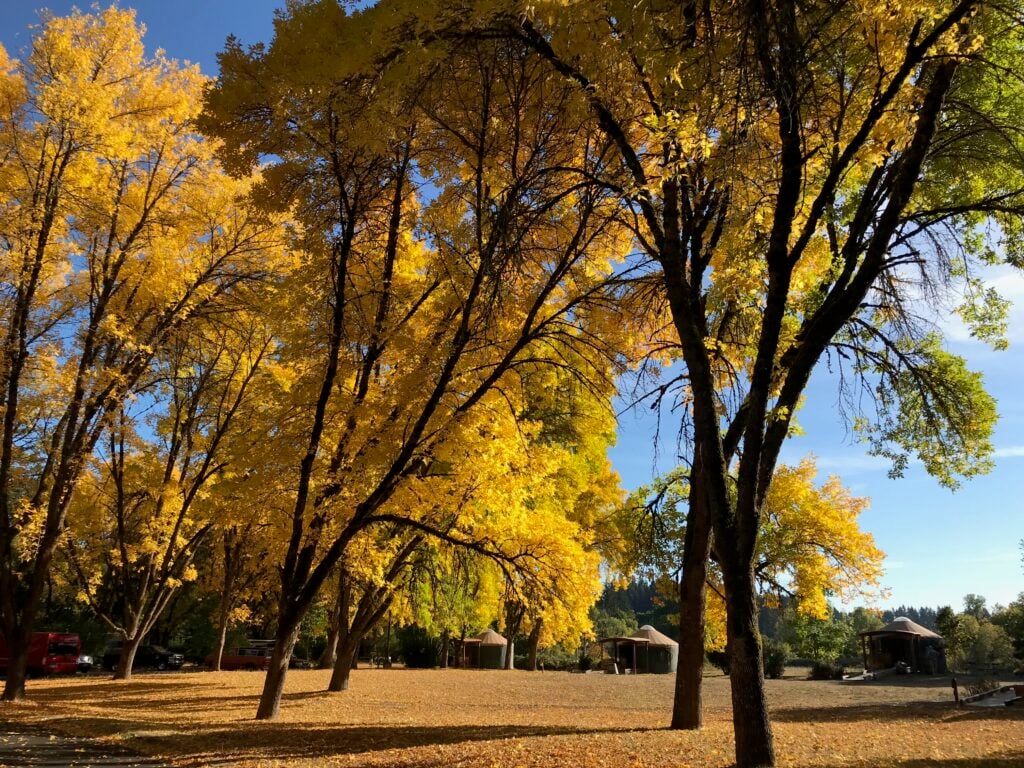 Champoeg State Park is a lovely place to camp in a yurt, tent, or RV and is about a half hour from Portland. Photo by P Dent

Bend, Oregon is located in the high desert in the central part of the state. There are several RV parks in the area as well as opportunities for boondocking in the Deschutes National Forest. Bend is well known for their craft breweries, outdoor activities including hiking and mountain biking, and food scene with many local restaurants to choose from.

You are welcome in Oregon! Bring your rig, bring your kids, bring your pets, plan to stay and get a real feel for this amazing state and all it has to offer. If you want to spend time on the coast, in the forest, in the mountains, or dive into some urban adventures, you can find it all in Oregon.

There are seemingly endless activities: go whale watching, take a hot air balloon ride, go white water rafting, explore underground caves, discover ancient petroglyphs, ride a horse on the beach, take a quad out over the sand dunes, or go deep sea fishing for a halibut. You can find all of that and much more while camping in Oregon.  Plan your trip with the RV LIFE Pro tools to get RV-safe GPS directions and to find more campgrounds and points of interest along your route.