You are here: Home / RV Basics / Do You Need RV Dump Gloves?
This post may contain affiliate links or mention our own products, please check out our disclosure policy here.

by Lynne Fedorick
September 10, 2022September 12, 2022Filed under:
Table of Contents show
Should You Use RV Dump Gloves?
Dumping RV tanks without gloves
The case for wearing RV dump gloves
Take your dump gloves off properly 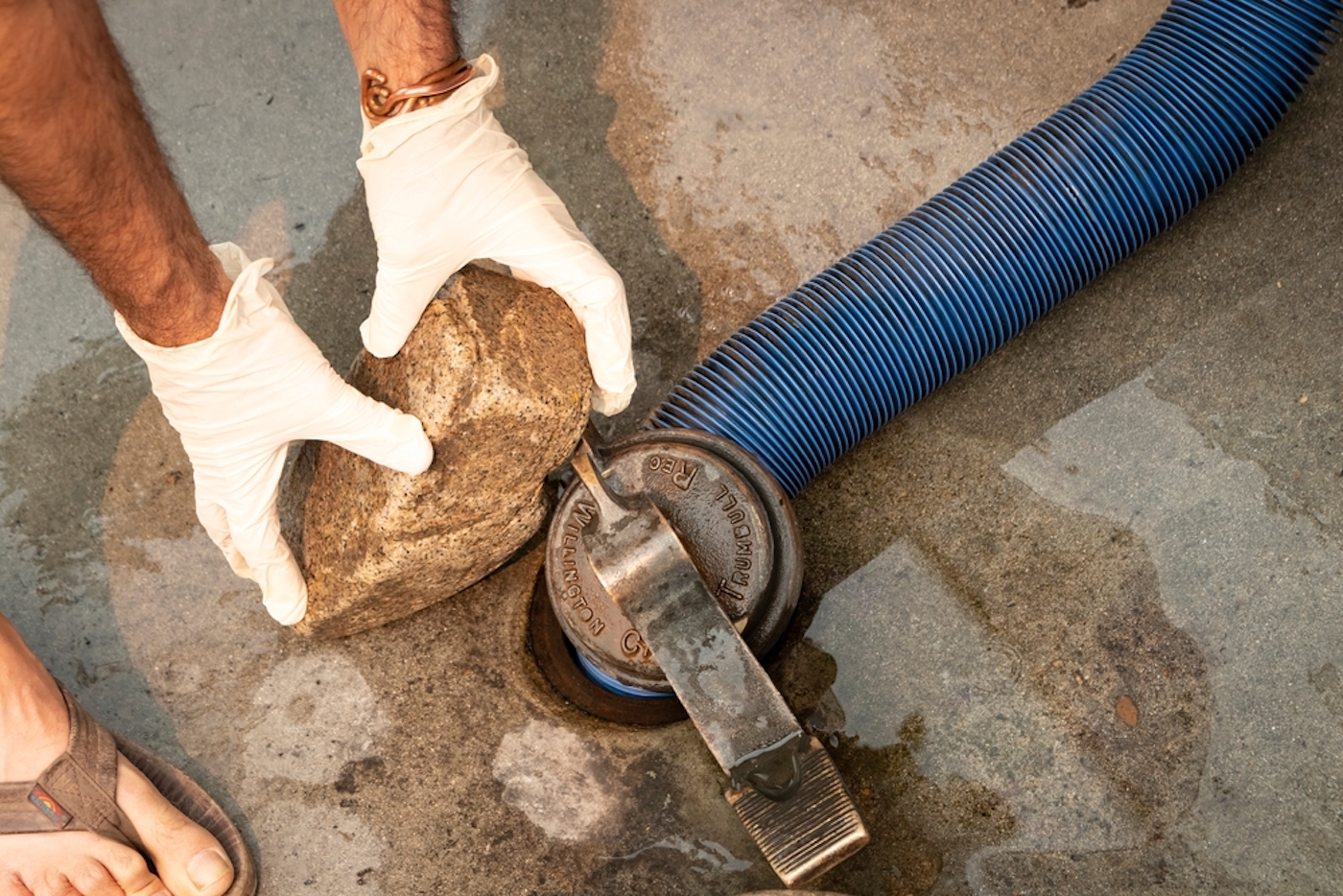 Should You Use RV Dump Gloves?

There are basically two types of gloves for handling the dirty work of dumping RV holding tanks. RV dump gloves seem to be either flimsy disposable gloves or more durable sanitation gloves that are meant to be washed and reused.

Of course, disposable gloves can be washed and reused as well, but they have a tendency to tear and/or get small holes in them after several uses. There is a surprising amount of controversy among the RV community about whether you really need to wear gloves for dumping your RV.

The health danger from RV sewage comes from E.coli and other bacteria that inhabit the digestive system. If you’re only handling plastic hoses, can’t you just wash your hands or use hand sanitizer after you dump? In this article, we’ll try to sort out what the facts are, and we’ll look for the truth in this ongoing debate.

Advocates of glove-free, bare-handed dumping argue that using dump gloves is wasteful and bad for the environment. They make the point that they are only handling the exterior of plastic hoses used exclusively for their own family’s black tank matter. No sewage gets onto the hoses. As long as they wash or sanitize their hands afterward, they are just as safe from becoming ill as they would be wearing gloves for dumping their tanks. Here is a sampling of what the bare-handers are saying:

“I don’t use them and have never gotten wet or contaminated. My hoses have always been clean and dry externally. Nothing has ever escaped on gotten on anything it shouldn’t.” – TN Chuck100

“Always. Even if I dont have any issues, Who knows what accident the previous person had and what they touched.” – clubhouse

“I always use gloves. Many people do not wash their hands after visiting public restrooms to do their business (both #1 and #2). I think that most of us have observed this fact no matter what public restroom is used. I assume that some of these are the same folks who do not wear gloves nor wash their hands after visiting the RV dump station. Even if there is no spillage, an RV owner still has to handle the sewerage hose, unscrew it, wash it out, and then work to stuff it back into the bumper or other holder.
As clean as someone may personally be at the dump station, who knows what a previous person has done or touched? Many state parks have potable water stations located at the dump station—usually about 25 feet away. I never use those fresh water sources because as both clubhouse and cm1159ps mention, who knows what a previous user may have done with not only the non-potable water source, but the (allegedly) potable one nearby?” – dewey02

The argument for gloveless, bare-handed dumping seems to make sense (on the surface). However, there are some very strong arguments for using dump gloves whenever you dump your waste tanks.

For the most part, E. Coli bacteria lives unnoticed in your digestive system. However, in large enough concentrations, certain strains can wreak real havoc on your health. Droplets of sewage can contain a high enough amount of E. coli to cause severe stomach cramps, vomiting and nausea, diarrhea, or even death within three or four days of handling it.

On top of that, numerous intestinal parasites, norovirus, Hepatitis A, and Rotavirus are spread through contact with trace amounts of feces, including microscopic droplets that may be present at the dump station.

Our hands might not be in direct contact with sewage when we are dumping our tanks. However, we can’t say that about all the RVers who hit the dump station before us. Maybe they got splashed and then rinsed their hands and sewer hose, using the hose and tap handle at the dump station. Now our hands will be contaminated with someone else’s sewage if we use that hose or tap. Gross.

“Over Labor Day weekend, we witnessed a guy who got splashed real good with his black tank contents. I felt so bad for the guy because he had it all over him. My 6-year-old daughter asked out of the blue if I thought that man was married. I said, ‘Probably, why?’ She replied, ‘Because he probably has her poo all over him too!’ I couldn’t argue that logic!” – CruizinKim

Yes, you can wash your hands and/or use sanitizer after dumping your tanks without dump gloves. However, this isn’t as effective for disease prevention as using disposable dump gloves and then washing your hands afterward.

You can get ill from contact with trace amounts of sewage. RV dump gloves will completely block contact with sewage, drastically reducing the chance you’ll get sick. It just makes sense to use them.

Take your dump gloves off properly

After you dump, it’s important to use a good sterile technique for taking your dump gloves off. This way, any sewage or droplets that land on your gloves won’t wind up on your skin. Here’s a video about how to do that.

Forums such as iRV2.com and blog sites like RV LIFE, Do It Yourself RV, and Camper Report provide all the information you need to enjoy your RV. You’ll also find brand-specific information on additional forums like Air Forums, Forest River Forums, and Jayco Owners Forum.

Lynne lives, travels, and works full-time in a Forest-River R-Pod 180 with her 2-pointers, Jolene and Annabelle. Lynne has been an enthusiastic RVer for over 35 years.  And then one day in 2019, she began full-time RVing as a lifestyle experiment.  She quickly fell in love with the convenience, freedom and minimalist lifestyle offered by full-time RV living.   Lynne is a professional writer and has been a professional dog trainer since 1995.   You can read about her travel adventures on her R-Pod Adventure blog, R-podyssey at: http://www.rpodaventure.com